Art and music, poetry and stories can move and touch you and leave their mark on you. I am often moved by music. It might be a country song or a pop tune on the radio, or it may be a piece of classical music.  Whatever the music, some songs just lift my spirits and leave me joyful, others sadden me when I hear them.

The poem “If” by Rudyard Kipling always brings a lump to my throat and the hymn “Jerusalem” causes me to catch my breath. The power within their words never fails to affect me and leaves me emotional.

I enjoy nearly each and every book that I read. And, despite being gripped by the tales held within their pages, very few stories profoundly affect me. Yet, this book, the ninth in Craig Johnson’s award-winning and New York Times bestselling Longmire series, did something odd to me. 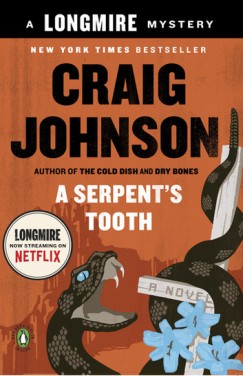 It’s homecoming for the Durant Dogies when Cord Lynear, a Mormon “lost boy” forced off his compound for rebellious behaviour, shows up in Absaroka County. Without much guidance, divine or otherwise, Sheriff Walt Longmire, Victoria Moretti, and Henry Standing Bear search for the boy’s mother and find themselves on a high-plains scavenger hunt that ends at the barbed-wire doorstep of an interstate polygamy group. Run by four-hundred-pound Roy Lynear, Cord’s father, the group is frighteningly well armed and very good at keeping secrets.

Walt’s got Cord locked up for his own good, but the Absaroka County jailhouse is getting crowded since the arrival of the boy’s self-appointed bodyguard, a dangerously spry old man who claims to be blessed by Joseph Smith himself. As Walt, Vic, and Henry butt heads with the Lynears, they hear whispers of Big Oil and the CIA and fear they might be dealing with a lot more than they bargained for.

I was up until gone 2am the other night, my eyes growing tired as I hurriedly turned the pages in eager anticipation of the delights and tension ahead. I flew through the last quarter of the book in an ever-increasing frenzy as the plot raced on to its scintillating climax. And, Boy Howdy!, what an ending it proved to be.

After reading all the previous Longmire novels and short stories one after each other in little over one month, I thought that I had come to know what to expect from Mr Johnson. Yes, in this tale we have the dry wit, the beautifully penned characters, the stunning landscapes and the excellent mysteries that we have become fond of. I was anticipating all that – it’s a Longmire novel and we expect no less than to be enthralled and entertained in equal measure. What I was not expecting was to be so wickedly, and deliciously, teased by the ending.

(I will try not to spoil anything for those yet to read the book! Consequently, some of what follows may not make any sense, but I really would hate to take away from anyone’s enjoyment of this book. PS. I’d also be keen to discover if anyone who has read this book experienced similar thoughts and emotions to me.)

It has been a long time since a book made me feel as this one did at the end, In fact, as I write this review, I am unsure if I have ever experienced the emotions I did as I read the final pages. I found myself repeatedly thinking (I may even have been saying it quietly to myself as I read) “Oh no! Please no. You can’t do that! No!” I was turning the pages with a growing feeling of dread and horror and found myself becoming somewhat emotional at the prospect of what might be coming in the words, lines and pages ahead.

With this novel, Mr Johnson masterfully kept this reader on edge until the last. He hit us with an unexpected uppercut towards the end and then delivered a blow came out of nowhere and that had us reeling. I’m still not recovered yet, days after I finished the book. The author ’s brilliant plotting kept us guessing and on tenterhooks right up until the final words.

Allied to this assault on our expectations, the author toyed skillfully with our emotions. Whilst in the midst of an action-packed finale, he wove in genuinely tender, beautiful and poignant moments. Moments which, though unexpected, were, in the light of Longmire’s journey so far, absolutely perfectly timed and woven wonderfully into the narrative.

In those final chapters and pages, Mr Johnson gifted us with a glimpse of what Longmire’s future could hold. I am still unsure, after finishing the book, if this promised future is now possible.

In my reviews of the Longmire books, I have previously claimed other titles as my favourites. Simply because of the way that this plot and story diverted from where I thought it had been heading before completely flooring me, I have to now say that “A Serpent’s Tooth” is my most favourite Longmire story.

How can a book that leaves you fearful for a character and gobsmacked by events be anything other than your favourite?