Some of you may have read my earlier reviews of Craig Johnson’s “Longmire” books on my blog. If you haven’t, don’t worry, you are in the majority as not many folk have visited my blog! However, if you are one of the small numbers who has chanced upon my reviews of them, then you might recall me describing the previous book, “Junkyard Dogs”, as “quite possibly,…the finest of the tales in the series to date”.

Well, that statement from me is plain nonsense and just goes to show that I know absolutely nothing. In the words of the Sheriff himself, I’m a “dumbass”.

“Junkyard Dogs” saw the author set the impressive high standards for his series. However, with “Hell Is Empty”, the seventh book in this increasingly entertaining series, Mr Johnson dramatically raises the bar to an exponentially higher level. 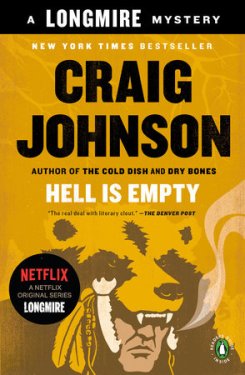 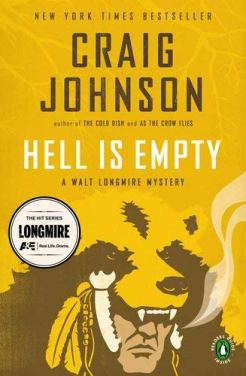 In this book, he lifts the reader high with the drama, action and emotion of the story. He takes the bar and raises it, and us, the reader, 10,000 feet high. Then, when we feel the plot and excitement have peaked, he elevates us again, revealing the hidden peaks above us. Finally, when we wonder just how high his storytelling skills can reach, the author elevates us to the very tops of the Bighorn Mountains themselves. And, what a jaw-dropping view it is from up that high. Writing-wise, it is some standard to set; but Mr Johnson has accomplished it.

In reading this tale, we are thrilled and delighted, saddened and entertained, shocked and worried as we accompany Longmire on his journey into a frozen Hell. But, what a journey we take, and who better to have by our side as we enter Hell itself than Sheriff Walt Longmire?

The story starts unassumingly enough. Longmire and his deputy, Santiago “Sancho” Saizarbitoria, are escorting a trio of convicts to the border where they will be handed over to the FBI and a host of other law enforcement agencies. Their prisoners are handcuffed and chained and Longmire and Sancho are armed and alert as they stop at a diner for food. All seems well. All seems under control.

The opening pages crackle with a palpable menace and a sense of foreboding lays within every word. You can sense that something is soon going to go very, very wrong. But, as with all the very best thrillers, you don’t know what’s going to happen or when. You simply know that just around the corner, maybe with your next page of the page, that something bad is waiting to hit you. As a reader, you cannot let your guard down and you’re on edge, eagerly anticipating the impending peril. For you know that, when the shit hits the fan, it’s going to be wonderfully and gloriously messy. It is going to be bad, and for readers, that is so good to see on the page.

I’ve stated previously that the Longmire tales are cinematic and this book is similar. The suspense rises in a series of peaks and troughs, just like in a movie where the director takes you to the edge of before relaxing his grip on you, only to surprise you in the next scene. The author handles this wonderfully well, building layer upon layer as he skilfully ratchets up the tension.

As with the other Longmire books, we again meet familiar and treasured characters along the way, along with a host of new and memorable ones. But, at the heart of this adventure, it is Longmire that we spend time alone with as he tracks into the mountains on a manhunt and we learn more about him as a man.

Despite this tale having plenty of action and, to date, the highest body count of a Longmire novel, it is quite an emotional and poignant trek through the Bighorn Mountains. The action is dramatic and exciting when it comes but it is tempered with a tenderness that is played out on the frozen heights. There are questions raised, some of which are half answered and leave you questioning further. And,  like a shadowy figure disappearing before us into the snow-swept mountains, we are shown a tantalising hint of Longmire’s future.

I only began reading the Longmire books at the start of August 2018 and have read the first seven already, picking up each new tale immediately after laying down the last one. As I wrote right at the start of this review, I’m a dumbass. I don’t claim to know much but I do know that I love these novels and I adore spending time with our sheriff in Absaroka County, Wyoming.

So, right now, I’m going to settle down into my Carhartt, snap back the spine of a paperback and launch myself into the next adventure for Sheriff Walt Longmire.

Why not come along and join me for the ride? It’s a ride you’ll love.