Okay. I know that they are called CD’s these days. But I am old enough to recall actually buying vinyl – before they became the latest hip, trendy thing to buy. Although, despite my age, I have graduated to a shelf full of CD’s and an iPod full of MR3’s, I still prefer to listen to my music in the album form where you listen to the whole thing. Front start to finish. Not just choosing individual tracks ad hoc. You know, to truly enjoy the experience as the artist intended you to.

So, here are my Top 5 albums of the year.

Many of my UK based blog followers may not have heard of Tim McGraw but may have heard of his wife Faith Hill. Like Hill, Tim McGraw is one of the top US Country music stars winning many awards and selling millions of albums. This, his 13th studio album, was released in September 2014 and is an absolute belter. They are all great tracks, take a listen to “Shotgun Rider”, this is a fantastic love song with a “ballsy” sound and it perfectly sums up how I feel about the fantastic woman, Sarah, in my life for the past thirty years. “Dream, life aint nothing but a dream, don’t wanna be Cruisin’ through this dream without you”.

And take a listen to his beautiful duet with the equally beautiful Mrs McGraw “Meanwhile Back At Mama’s” in particular. You don’t like country music? Try this before you nail your colour firmly to the “anti” mast.

While you are at it, track down 2013’s “Highway Don’t Care” featuring Taylor Swift and Keith Urban.

2. “Bringing Back The Sunshine” by Blake Shelton

Like Tim McGraw, Blake Shelton, is another top star in the US country scene. He is also a judge/mentor on the US version of “The Voice” for which he earns a reputed $6 million a season to add to his (reputed) net worth of $50 million. Country music is big and the stars are truly stars.

This 2014 album has 12 great tracks to treat your ears to. The title track sets things off to a pulsating start, while “Neon Light” is a fun, lively track and the whole album has a really terrific sound to it. It is a delight to listen to and Sarah and I played it, along with McGraw’s, throughout our holiday this year.

I’ve come to the conclusion that you either love her or hate her. Ms. Swift seems to polarise opinion. For me, she is simply a wonderful songwriter and performer, a remarkably (or, seemingly, from what I have seen on TV) level headed and genuinely nice young woman, and a super savvy business woman. She really does seem to have it all. Talent, beauty, brains and personality. And, I’m eagerly awaiting her gig in Manchester in June 2015!

This album, Swift’s fifth studio release, follows on from the huge success of 2012’s “Red” and sold over 600,000 copies on the day it was released. It went on to sell 1,287,000 copies in the first week., making it the highest  selling album since 2002’s “The Eminem Show” by Eminem. Although, this album has seen Taylor move into pop and away from her country style of recent albums, it is a great listen and she displays her quality lyric writing coupled with incredibly catchy and perfect tunes. Listen to “Blank Space” and see for yourself what her song writing is like. It’s perfection. She really does have it all.

4. “Kings & Queens Of The Underground” by Billy Idol 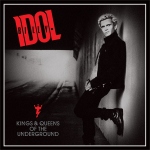 Oh, that sneer and lip curl!

If, like me, you remember those great rock tracks “White Wedding” and “Rebel Yell” with affection, then these 11 tracks will rock your world! The original rebel Billy Idol, that hedonistic, blonde topped punk of the 1980’s has realised a cracking album. A man’s man and a belting rocker from my (ahem) youth. The first track, “Bitter Pill”, gets this off to a belting start – it is classic Idol but for today. You recognise its themes and sounds but it is definitely not a stale affair from a washed up relic. Listen to “Love And Glory” and revel in the way it builds, stirs your emotions and rips out of your speakers. This is a class album. Pop it in your CD player, turn it up to 11 and sing along with gusto to Billy. This is a feel good album. A treat.

OK, you’ve got me. Three of my top five are country artists. And a fourth comes from a country music background. Yep, I like country music. Mainly the newer style, with a rockier edge, but some older stuff too. This album by 39 year old Dierks is another belting addition to the many great albums, and tracks, from 2014. The stand out track, from an album full of great tracks, is, for me, “Bourbon In Kentucky”. A punchy, driving guitar, song of lost love. Listen carefully and you’ll hear Kacey Musgraves on the vocals. This track kicks a truly stunning album off to a pulsating start. Then treat your ears to “I Hold On”, “Say You Do” and follow those with the fun, kick ass, “Drunk On A Plane”.