When Wyoming highway patrolman Rosey Wayman is transferred to the beautiful and imposing landscape of the Wind River Canyon, an area the troopers refer to as no-man’s-land because of the lack of radio communication, she starts receiving “officer needs assistance” calls. The problem? They’re coming from Bobby Womack, a legendary Arapaho patrolman who met a fiery death in the canyon almost a half-century ago.

With an investigation that spans this world and the next, Sheriff Walt Longmire and Henry Standing Bear take on a case that pits them against a legend: The Highwayman. 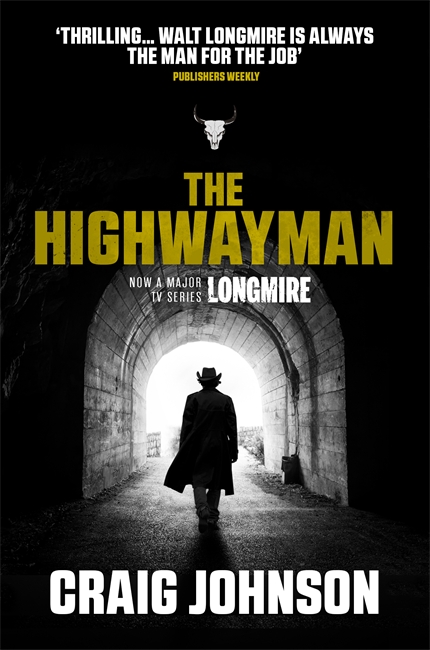 This is another of the shorter Walt Longmire tales from award-winning novelist Craig Johnson.

However, having fewer pages than a full-length Longmire mystery has not impaired the joy and delight that is found within its pages. In his introduction to the story, Mr Johnson pays homage to one of his favourite ghost stories, “The Signalman” by Charles Dickens. And, with “The Highwayman”, Mr Johnson has penned his own excellent addition to the ghost story genre while maintaining everything that we have come to love in a Longmire adventure.

This is pretty much a “two-hander” Longmire story, with the principal characters involved from the series being our Sheriff and his long-time friend, Henry Standing Bear. The other characters that we meet are new to the series, each one is well written, believable and leaps off the page like a living, breathing person – well, almost every character! The titular Highwayman being the obvious exception.

Once again, as with every Longmire tale so far, a great deal of our enjoyment comes from the interactions between Henry and Walt; their friendship is deep and long-standing and the author portrays this exceptionally well. He writes it with a deftness and a fondness for his creations; he never oversells their relationship or stretches our belief in their bond. I find myself wondering who, in his personal life, the author’s has based Walt and Henry’s friendship on.

Regular readers to the series will be accustomed to Longmire’s link with the after-life and his exposure to possible supernatural forces. Of course, Walt is usually facing a life-threatening situation or is in immediate danger when he has his “meetings”, visions perhaps, with Native American spirits. Therefore, and it is part of the appeal of the books, we can never be quite sure if Walt has imagined these events or if they have actually happened.

This tale further muddies – in a glorious and riveting manner – this uncertainty about Walt’s earlier experiences and we find ourselves uncertain if The Highwayman exists or not.

This is great fun to read. It has The Sheriff and The Bear, acts of heroism, moments of tenderness, Longmire’s trademark wit, humour and affection combined with the stunning and breathtaking scenery.

I suspect that a certain Mr C. Dickens would approve and would tip his hat to Longmire’s creator for this satisfying ghost story.