For me, one of the greatest joys of settling down with a book is how the author’s words transport you to a different time and place and, for a while, leave you in the company of the fictional characters they have created. A little over a week ago, I decided to try a book by Craig Johnson and to explore the world of Sheriff Walt Longmire and his investigations in and around Absaroka County in Wyoming. 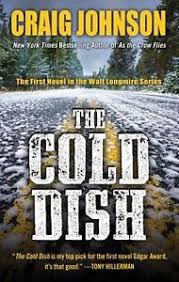 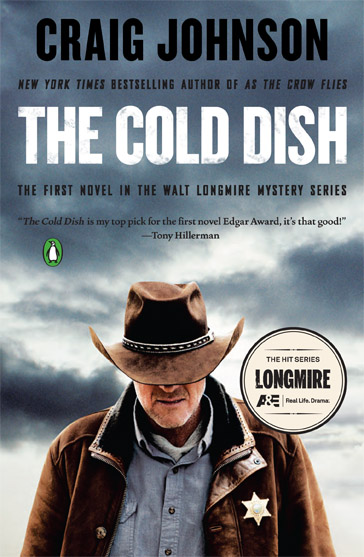 “The Cold Dish” is the first tale in the series and was published in 2004. The series now numbers thirteen novels with the next instalment, “Depth of Winter”, due in early September 2018. There has also been a half dozen shorter stories and ebooks which slot in and among the chronology of the series.

Walt Longmire is a decorated veteran of the Marine Corps and served as a Military Police officer in Vietnam during that war. After his service, Walt finds himself as deputy to Sheriff Lucian Connally before, eventually, being elected as Absaroka County Sheriff.

Johnson writes terrific characters; Walt is a joy to be with and his longtime friend, Henry Standing Bear, is the type of reliable and solid guy we would all want standing beside us when the chips are down. The larger cast includes Vic Moretti, Walt’s wonderfully foul-mouthed and cynical lead deputy, Ruby, his PA/secretary and a host of townsfolk, both good and bad. Oh, and there’s his dog, too. He’s called Dog. The name suits him perfectly.

However wonderful these characters are, though – and, believe me, they are wonderful – Johnson has two others that almost steal the show. They are both majestic, inspiring and beautiful in the extreme; welcome to the landscape of Wyoming and the weather that shapes it. I have been lucky to have visited America on several occasions but I have never been to the state of Wyoming. Oddly though, I do have a Rand McNally map of Wyoming and Montanna. It’s proved handy while reading these books.

One of my favourite descriptions is this;

“The clouds were dappled like the hindquarters of an Appaloosa colt, and the beauty kicked just as hard.”

(I might try to persuade my wife to holiday there.)

With Johnson’s prose, I feel that I am getting to know the state. He breathes life and colour and vitality into the pages and the mountains, valleys, and plains rise up and loom large and dominant in his tales. For an Englishman like myself and, I suspect, for other men of my age, the pull of the Wild West, admittedly gleaned only from films and TV, is romantic, powerful and ever so evocative. Which little boy didn’t yearn to be a cowboy? To be tough, resilient, resourceful, silent and strong with a fierce sense of justice. To ride the plains and help people on the way by righting wrongs.

This is what Walt Longmire is and what he does.

In this first tale, the body of Cody Pritchard is found shot to death. Several years earlier, Cody and three of his friends were found guilty of raping and torturing a local Cheyenne teenager. It appears that someone is bent on revenge. Longmire is tasked with finding the murderer while keeping the remaining three assailants alive. His investigation is hampered by the weather and complicated by the fact that the victim is the niece of his friend, Henry Standing Bear.

In addition to the taut plotting, the stunning landscape, and the incredible weather, Johnson delivers terrific dialogue between his characters. The warmth and affection they have for one another – other than those they are pointing a gun at – is evident in their conversations and, often, by what is not said. You feel as if you have stepped into a community that lives and breathes and where the relationships between the characters are real and tangible.

There is also an awful lot of humour in the tale. Both Vic and Henry Standing Bear possess a fabulous sense of comic timing and they are able to deliver perfectly executed one-liners and put-downs, mostly at the expense of Walt. This light, comedic touch lifts the tale and really helps to establish the relationships between the central characters.

I found the story to be exciting – it is a thrilling murder investigation at heart – and the plot develops easily and quickly. Johnson has a real knack of propelling the story along and for achieving this without detriment to the development of the characters, major or minor. In fact, even the most minor of characters is well delivered and believable.

I may not yet understand all the references to specific items and one or two terms are a little off my radar (in book two, I had to Google what “Wayfarers” are) but this has not diminished my enjoyment in any way.

The covers of the books are also very striking and help to set the tone for the novels. My favourites are the covers featuring the simple, stylised artwork with its restricted colour palette and prominent, bold typography. The more recent covers are equally fine and the use of striking and atmospheric imagery is very appealing to the eye.

Would I read another Walt Longmire book? Well, put it this way, I finished book two late last night and am already well on with the third.

Additionally, and I was considering getting one before I picked up the books, Walt and Mr Johnson have nudged me towards placing my order for a coat from Carhartt. Hopefully, it arrives in time for the latest adventure to hit the shelves.