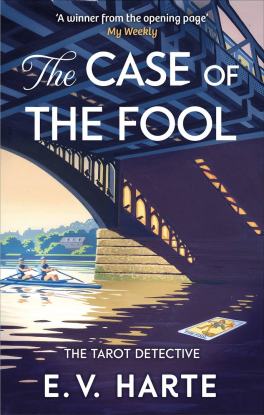 This was a review copy kindly provided by NetGalley in exchange for a fair and honest review.

This is the second mystery from the pen (laptop? tablet? quill?) of E.V. Harte to feature her gloriously bonkers heroine, Dolly Greene, aka The Tarot Detective, and it is equally as enjoyable a read as her inaugural adventure, “The Prime of Ms Dolly Greene”.

The story begins as Dolly returns from a romantic holiday with Raff, her police sergeant boyfriend, both of them relaxed and content from enjoying a fortnight of sun, sea, sex and (presumably) sangria (or, other, similar, alcoholic beverage(s)). But, as anyone who has ever been away on any sort of holiday can readily tell you, real life is always sat waiting for you when you return, keen to remind you exactly why you packed your suitcase and decamped elsewhere in the first place. And, for Ms Greene, this is no exception.

On her return to Tinderbox Lane, Dolly is immediately confronted with a new client, a moody Russian girl, who demands a tarot reading. Dolly also discovers that the exotic dancer girlfriend of her recently deceased neighbour has moved in next door and that squatters are occupying an empty property in the lane. Dolly’s post holiday romantic bliss is further shattered when her daughter, Pippa, who shares her one bedroom cottage, supports the squatters and begins a relationship with one of them. This puts Pippa at odds with Raff and Dolly makes for an unhappy situation all round.

When an anonymous telephone caller alerts the police to the discovery of a dead body in a nearby house and gives Pippa’s name, Dolly and the residents of Tinderbox Lane are thrust into a mystery.

This is a really enjoyable read; it deals with death and murder in a “cosy” manner – nothing too gritty or shocking in the crime details to upset the more mild mannered of readers. The Tinderbox Lane regulars are a delightful bunch of dotty, bizarre and likeable characters and I had fun spending time with them. And Dolly is a really engaging protagonist I liked her in book one and have grown fond of her already. My one gripe is that, on reflecting back over this book, I think that Dolly didn’t appear often enough in the plot. I may be wrong but that is the feeling I got. However, that probably is not be a bad thing, as it shows that E. V. Harte’s other creations, Pippa, Raff, Professor Filthy and co are more than capable of stepping up to the crease.

In my review of the first book in the series, I mentioned the similiarities to the Agatha Raisin books. However, having read both of E.V. Harte’s novels, I think the time will soon come when books like this will be referred to a “Dolly Greene-esque”.

Another thing that I really like about these books are the covers. I think the artwork is superb, really evocative of the settings and style of the writing, and the typography is delicious.

I look forward to book three and spending more time with Dolly.