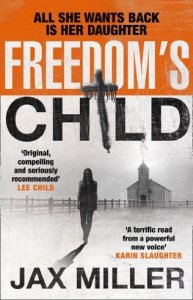 What a pulsating, driving rush this book is. It is a superbly crafted novel and thoroughly mesmerizing. If I understand the word correctly, then I’d term this as “visceral”.

Originally jailed for the killing of her cop husband, Freedom Oliver has spent the past 18 years under witness protection after his brother was later convicted of the crime. Forced to give up her young son and new born daughter just hours after delivering her, Freedom has kept silent watch from afar over her children. When her brother-in-law is released from prison and her daughter goes missing, Freedom will stop at nothing in her quest to save her.

The writing in this debut from Ireland based, New York born Jax Miller is punchy, effective, often brutal but always keenly observed. Miller has created characters with depth and rich appeal; characters whom you care about, villains who you loathe. Her portrayal of Freedom vividly captures a mother torn by her past indiscretions and mistakes, racked with guilt and self-loathing yet possessed of a resolute determination to make amends.

“Freedom’s Child” is a stunning, scintillating romp through the darker side of America; a dark underbelly teeming with self-proclaimed religious prophets, seedy criminals, lawless biker gangs and corrupt law enforcement. It reads easily, rather like a gritty graphic novel, and is very hard to put down. The story builds wonderfully and has a satisfyingly fabulous ending.

This is great fun to read, an absolute joy. Imagine your favourite crime noir film only in written words and on a page.